Since this is an election year, and my opinionated idealisms are going to be agitated. The need for screaming into a pillow of self-serving therapy is going to be necessary. I’m not trying to convince anyone of anything, nor change anyone’s mind. I am though recording my thoughts for future reference, as well as examining my own behaviors, and thinking. Communications, and the way it occurs, contains patterns that my sensibilities pique at, and I am drawn to examining the phenomenon.

The Free Press is no longer free, the cost is too immense, the ultimate price more dire than known.

Legal Definition of freedom of the press

: the right to publish and disseminate information, thoughts, and opinions without restraint or censorship as guaranteed under the First Amendment to the U.S. Constitution

The Free Press was guaranteed freedoms by our founders, to insure, and ensure, the public as to the truths of the times, truths of the law, and truths of the government. It is, as stated above, closely intertwined with our first amendment guarantees of freedom of speech. The purpose for the protections afforded them under the constitution was to hold a invaluable check to the balances of Government, and Judicial breaches of trust, truths, and oaths taken to uphold that constitution. We have protected that fourth estate for generations through Supreme Court cases, Pulitzer prizes, and even public protests. As our world grows ever populated, and the means to that insurance dances between televised, printed, and digital entities; The definition, and thus protections afforded to the Free Press must be contemporarily reexamined.

During this growth of a nation, the concepts of liberty, and freedom, rights and legalities, have been, and continue to be brought to this country’s highest court, our highest denominator. In those proceedings the definitions of us, the people, our ways of life, our religions, and our politics, have all changed since the beginning of this nation building. They have all either been defined, clarified, noted for the record, or recognized under laws. Those definitions of who we are, and what we deem true in our form has been constructed from the duties of a practicing free press. One that we hold to ultimate utility to inform, educate, and relay, the common good, the will of the people, and the promises of accountability. Our efforts, our national compass, our national security, and history, are intertwined within that duty, and the honor of those truths. An oath needing not to be taken, for the truth itself is its own reward, humility the grandest virtue.

We are not free from the pains of growth, to challenges that arise before us. We continue to change as this growth overwhelms, the cost of those changes can be seen in the collisions of classes, the partisanship power plays, and the contradicting information streams. The Pandora’s box of the information age, the dissolving of the printed press, the challenge of the vast amount of rapid growth all aided in our prosperity, and sadly our dystopic hungers as well. The press was already falling to the capitalist models of survival of the fittest, monetary requirements, and partisanship, long before the age of the Internet. The corporate, political, and moral models that desired, and necessitated a strict dialogue soon found allies in the media, and entertainment industry. People, and their practices thrust into molds of revenues, became a commodity, one that would begin to undo the very construct of the free press. 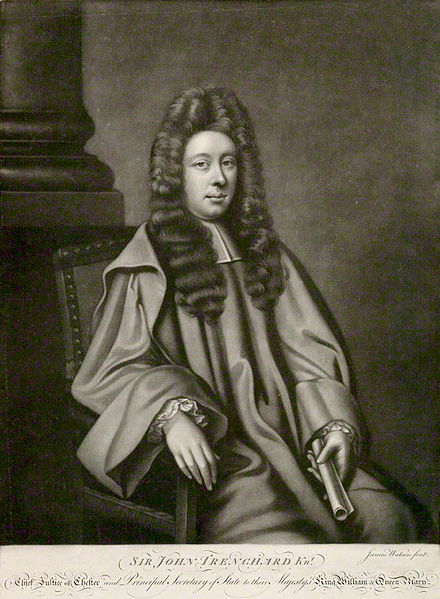 Between November 1720 and December 1723, John Trenchard and Thomas Gordon wrote an extraordinary series of 144 weekly essays for the London Journal, taking their pen name, Cato, from the Roman statesman who had defied the emperor Julius Caesar. MTSU.EDU  (Image of Trenchard via Wikimedia Commons, public domain)

It is important to note here that in our combined history as a species, information has always been a commodity. The war plans of enemies, the engineering designs of the great wonders, etc… Information, as it is represented in the press has also become a commodity of exclusive content, exclusive sources, and getting the story out first directives. Increasingly driven by monetary concerns, partisan talking points, and the facade of impartiality. The marketing of information, about people, their viewpoints, and their lifestyles, is at, and has been at, such a frenzied pitch that it overwhelms the means to constrain it, manage its legalities, or render any substantial oversight to it. In the process, the media and press that afford us best insights, our best modicum of truths of those things beyond our daily perceptions, faded into a monotone talk box. Normalizing the messaging, minimalizing the nature of the information, and in the process appease the various sponsors, and monied pathways that they rely upon. This is by far the framework of a free press, as it is a divisive hammer to the constitutional framework we have built.

The nation, and thus its founding documents, were not created with capitalism in mind, quite differently. The fears of corporations were well in hand all those years ago.  “Jefferson wrote in 1825 to William Branch Giles of “vast accession of strength from their younger recruits, who having nothing in them of the feelings or principles of ’76 now look to a single and splendid government of an Aristocracy, founded on banking institutions and monied in corporations under the guise and cloak of their favored branches of manufactures commerce and navigation, riding and ruling over the plundered ploughman and beggared yeomanry.”  While the models of corporate power structure, and monetary requirements are not singularly responsible; The structure of capitalism does not uphold a free press as imagined by our founders. The Corporate Democracy that has arisen from our industrial, and economic revolutions leaves little room for unfettered truth.

“The press was to serve the governed, not the governors.”—U.S. Supreme Court Justice Hugo Black in New York Times Co. v. United States (1971)

Contentuary erosions of the tenets of the free press include political, religious, and class/caste, worldviews. They contain the angst arrived at the constant push, and need, for change. The intertwined dynamics of politics, and religion drive societal ebbs and flows. Tied closely together with monied information pathways in the media, the press, and entertainment, have left societal imprints that have grown outsized, and unmanageable. Unchecked, these various impetus’ have become the origins of mistrust, misinformation, and flat out lies. The connections of the people, the governed, to this gamesmanship of truth, and duty, is irrevocably lost. The truths, and therefore trust, that was once a unshakable belief, or at least a strong one, is not felt within, not carried, and soon resented. It is here that I remind that the free press today falls under the category of many industries…

In ensuring a free press, the duty falls the lowest denominator, the people. In the 1970’s, a series of public service announcements aimed at educating children to the consumerism tactics, and the advertising misinformation that was mostly unregulated and influenced children unrealistically. There was also a series of P.S.A.’s to introduce the basics of government, the function of Congress, and the duties of the Supreme Court. Similar educational programs are now being brought to students, including warnings about the dangers of social media, digital information, and targeted misinformation tactics. The process of information gathering in the press, and media, becoming progressively transparent is still hindered by the corporate structure of the free press. The need, and in some cases, the demands of one interest, often override others, erasing the basic tenet of the free press, truth.

The information age has elicited a major shift in every aspect of daily life. The moniker given to this era of the digital intertanglement humans have endeavored upon has brought with it an open ended expanse of ingenuity and innovation. Those innovations are not always derived with a positive net effect on the population. Ingenuity has usurped our abilities to respond to the onslaught of misinformation. The goal of many organizations, either illicit, or legal, is to produce enough misinformation as to find the truth untouched, unreported on. To beguile the public into believing information that is derived from that misinformation, in essence, to believe in mistruths. The media is slowly understanding their tenuous positions.

In the absence of truth, there can be no lies.

The introduction of social media has been at best, a stumbling start. The learning curves not taken into account, the generational divisions as technology releases demands and creates others unforeseen. Taken as an outsized part of the whole, that piece of the human equation blended the imaginary, the prudent, and the mythological states that would bleed into the real world in fits and starts. The unseen corners of manipulation, and secrecy, soon engulfed a media industry desperate for purpose. The polling, and reporting that these entities conducted, and continue to do, rife with algorithms, false profiles, and imaginary support or argument against. They cast a poor light on issues, and politicians, that in turn direct the narrative of the very short attention span news cycles that also have become the norm. The popularity for a digital bill of rights is gaining acceptance as our lives become less and less tactile, and our reality is based on those things unreal, digital, and dangerously unprotected.

The demands of the populace are many. The abilities of even our best efforts have fallen short of protecting the basic principle the founders wished to preserve, truth. The normalizing, and thus dismissal of outrage, injustice, and the real pulse of the populace, and electorate, demands examination once more. It demands an accountability to that principle, the protection of it against inroads meant to erode away at it. The fourth estate must recognize, and be recognized as the defenders of truth, and be held responsible for the self policing practices that have fallen, and left us where we are at currently. Before all else fails, before we lose our voices completely, we must speak up, and defend that most important aspect of our democracy. If we do not defend the truth, we will be unarmed completely in these depths of deceptions.